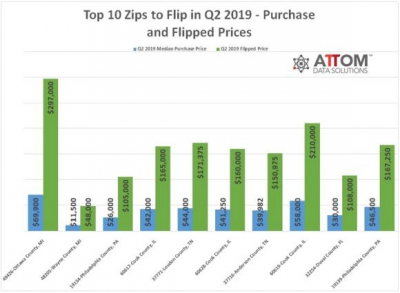 Also noted in the report, homes flipped in the second quarter of 2019 generated a gross profit of $62,700 (which is the difference between the median sales price and median paid by investors). That number is up 2 percent from Q1 2019, but down 2 percent from Q2 2018.

Overview:  Mortgage rates moved lower after the one-two punch of weaker than expected manufacturing and services data which raised expectations for the potential of two more rate cuts by the Federal Reserve this year.  We had a very solid jobs report on Friday with a new 50 year low for Unemployment (3.5%).

Services:  The National ISM Services PMI was weaker than expected (52.6 vs est of 55.0).  While any reading above 50 is still expansionary (meaning that the services sector which accounts for 85% of our economic output, grew last month) it is the slowest rate of growth since 2016.

Jobs, Jobs, Jobs: We got the Big Jobs report on Friday. You can read the official BLS release here.

Here is the tale of the tape:

The Talking Fed:  Fed Chair Powell spoke on Friday. You can read his prepared statement here.

Here are a few key sentences from the speech: