Homes to be Built by Robots in the Future? 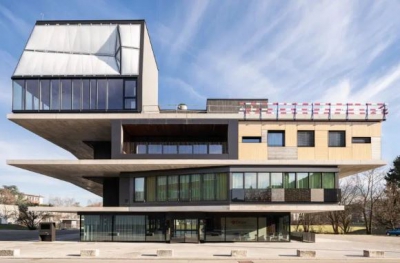 Homes to be Built by Robots in the Future?

A group of Swiss researchers have their proof of concept in the DFAB House, described as "the first habitable building designed and planned using a choreography of digital fabrication methods."

The DFAB House is 3 levels and features 3D printed ceilings, energy efficient walls, timber beams assembled by robots and an intelligent home system. The house is near Zurich and was developed by a team of experts at ETH Zurich University with help from thirty industry partners. It took four years to develop and build the house, which measures 2,370 square feet and required 60% less cement than a traditional building. The DFAB House also passed stringent Swiss building codes.

This isn't the first digital fabrication project to come about, either. Chinese company WinSun demonstrated 3D printing for architectural purposes in 2014 by manufacturing 10 single story houses in one day. The next year, it printed an entire apartment building and a neoclassical mansion. The projects remain in development stages.

Overview: Yet another round of very solid domestic economic data (Retail Sales, CPI) caused long bond traders to shift their expectations from a 50BPS Fed rate down to a 25BPS to 0BPS range.  We also saw some rare positive momentum in trade talks between the U.S. and China.  The ECB kept their interest rate the same but did announce a new round of QE but the markets don't believe that they have the ability to actually carry out their new bond buying program.  Those three areas hammered MBS pricing and drove mortgage rates higher.

Trade War: President Trump has agreed, as a gesture of good will, to move the increased Tariffs on 250 Billion Dollars worth of goods (25% to 30%) back from October 1st to October 15th. Beijing announced that it would indeed encourage state-owned companies to begin "goodwill" purchases of US soybeans, pork and other farm goods (desperately needed by China) by issuing waivers from trade-war tariffs.  Beijing also waived import tariffs on more than a dozen US goods. Beginning Sept. 17, China will remove 25% tariffs on 16 types of US exported goods for one year - a sign of good will ahead of talks between US and Chinese trade delegations.

Central Bank Palooza:  The European Central Bank (ECB) kept their key interest rate at 0.0%,  However, they did lower their Deposit Rate from -0.4% down to -0.5%.  This was widely expected but the unknown was the announcement of a NEW bond buying program of $20B Euros per month of net asset purchases "for as long as it deems necessary".

What To Watch Out For This Week: