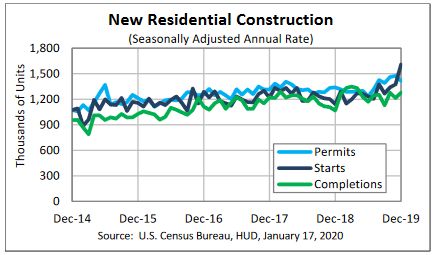 According to the newly released report by the U.S.Census Bureau and the U.S.Department of Housing and Urban Development jointly, U.S. home building surged to a 13-year high in December as activity increased across the board, suggesting the housing market recovery continues amid low mortgage rates, and could help support the longest economic expansion on record.

Housing starts jumped 16.9% to a seasonally adjusted annual rate of 1.608 million units last month, the highest level since December 2006. The percentage gain was the largest since October 2016. Data for November was revised higher to show home building rising to a pace of 1.375 million units, instead of advancing to a rate of 1.365 million units as previously reported.

Single-family home building, which accounts for the largest share of the housing market, jumped 11.2% to a rate of 1.055 units in December, the highest level since June 2007. Single-family housing starts rose in the Midwest and the populous South. They, however, fell in the Northeast and West.

Overview: Two big trade deals were resolved (China and Mexico/Canada) that locks down deals with our three largest trading partners.  We had very tame inflationary data and solid housing data.  We also had a few bright spots in some regional manufacturing reports as well as a benign Fed Beige Book.

Retail Nation: Retail Sales were much stronger than expected with the key Ex-Autos figure showing a MOM gain of 0.7% vs est of 0.5%.  The headline Retail Sales data matched market expectations with a gain of 0.3%, but its really a small beat due to the upward revision in November.

Inflation Nation: The December Consumer Price Index (CPI) YOY headline reading matched market expectations with a gain of 2.3%, which was an increase over November's YOY pace of 2.1%. The Core (Ex food and Energy) YOY reading also matched expectations of 2.3%.

Manufacturing: The January Philly Fed Manufacturing Index blew the doors off of estimates with a 17.0 reading vs. an expected 3.8.

Jobs, Jobs, Jobs: The November Job Openings and Labor Turnover Survey (JOLTS) was much lighter than expected (6.800M vs est of 7.233M) and was the first time below 7M unfilled jobs since November 2018.

Consumer Sentiment: The Preliminary January reading was fairly strong at 99.1, the market was expecting 99.3.  The one year inflation outlook rose from 2.3% to 2.5%.