Buying a Home is more Affordable than Renting in most of the U.S 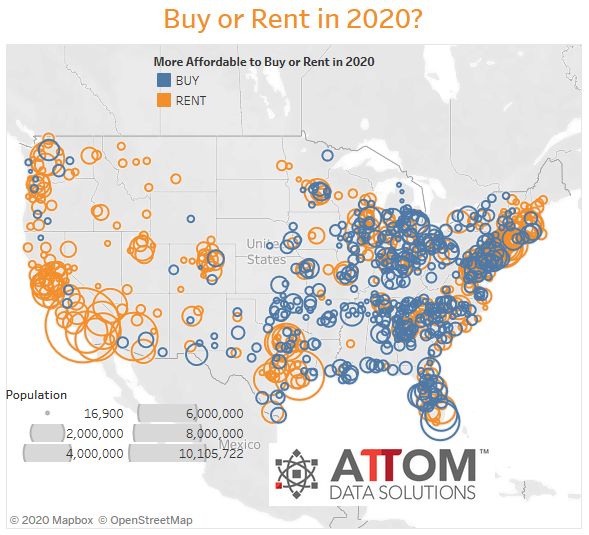 Buying a Home is more Affordable than Renting in most of the U.S

In the newly released ATTOM Data Solutions 2020 Rental Affordability Report, it shows that owning a median-priced, three-bedroom home is more affordable than renting a three-bedroom property in 455, or 53 percent, of the 855 U.S. counties analyzed for the report.

However, the analysis shows a split between different-sized markets, with ownership more affordable mainly in lightly populated counties and renting more affordable in more populous suburban or urban areas.

“Home ownership is a better deal than renting for the average wage earner in a slim majority of U.S. housing markets. However, there are distinct differences between different places, depending on the size and location from core metro areas,” said Todd Teta, chief product officer with ATTOM Data Solutions. “For sure, either buying or renting is a financial stretch or out of reach for individual wage earners throughout most of the country in the current climate. But with interest rates falling, owning a home can still be the more affordable option, even as prices keep rising.”

Overview: Overall, we had another week of very solid economic data with strong readings in the Services and Labor sectors which would normally be negative for mortgage rates. But, more that offsetting the strong economic data was geo-political concern which drove up demand for U.S. long bonds and helped to keep mortgage rates low for yet another week.

Jobs, Jobs, Jobs: We had Big Job's Friday! You can read the official BLS report here.

Geo-Political: On the U.S./Iran/Iraq front, we had a few developments that "spooked" bonds. First, is the fact that Iran once again attacked U.S. military installations just North of Baghdad with rocket(s).  Secondly, it was confirmed that the Ukrainian 737/800 jet was downed by an Iranian missile.  The vast majority of the passengers were Canadian (there were no U.S. passengers).  It very well may have been struck down in error by Iran but none-the-less it is an issue.

Services: ISM Non Manufacturing PMI for December hit 55.0 vs est of 54.5.  This represents more that 2/3 of our economic output, any reading above 50.0 is expansionary, its the best reading since August

Factory Orders: November orders shrank by -0.7% but that was actually better than market