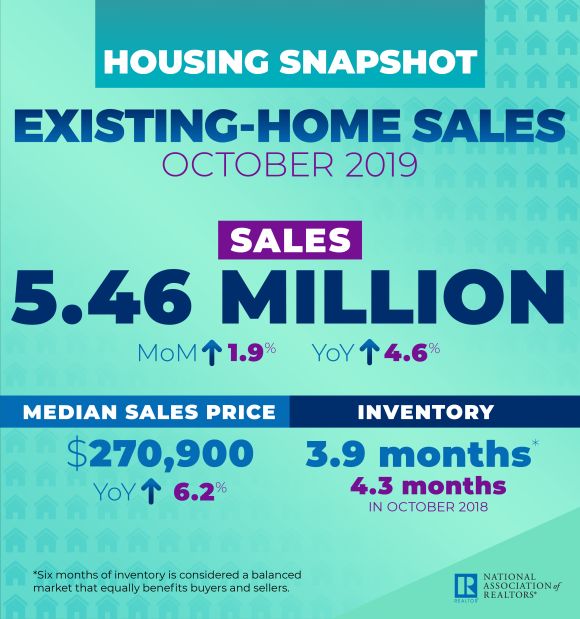 Existing-home sales rose in October, according to the National Association of Realtors. The four major U.S. regions were split last month, with the Midwest and the South seeing growth, and the Northeast and the West both reporting a drop in sales.

Total existing-home sales are completed transactions that include single-family homes, townhomes, condominiums and co-ops.  They increased by 1.9% in October to a seasonally-adjusted annual rate of 5.46 million units, overall sales are now up by 4.6% from a year ago (5.22 million in October 2018).

Total housing inventory at the end of October sat at 1.77 million units, which is down approximately 2.7% from September and 4.3% from one year ago (1.85 million). Unsold inventory sits at a 3.9-month supply at the current sales pace, down from 4.1 months in September and from the 4.3-month figure recorded in October 2018.

Mortgage backed securities (FNMA 3.500 MBS) gained just +1 basis point (BPS) from last Friday's close which caused fixed mortgage rates to remain at or near the same levels as the prior week.

Overview: We had a fairly quite week in the bond market and the net change of only one basis point is certainly reflective of that. We had some solid housing news but no major economic releases that had the gravitas to impact mortgage rates.  The bond market (which controls mortgage rates) was held in a narrow range as there was nothing really new on the trade front.

Manufacturing: The November Philly Fed Manufacturing Survey was stronger than expected (10.4 vs est of 7) and was double October's pace.

The Talking Fed: We got the Minutes from the last FOMC meeting you can read the official release here.

Central Bank Palooza: The People's Bank of China dropped their key interest rate from 4.20% to 4.15%.

It is virtually impossible for you to keep track of what is going on with the economy and other events that can impact the housing and mortgage markets.  Just leave it to me, I monitor the live trading of Mortgage Backed Securities which are the only thing government and conventional mortgage rates are based upon