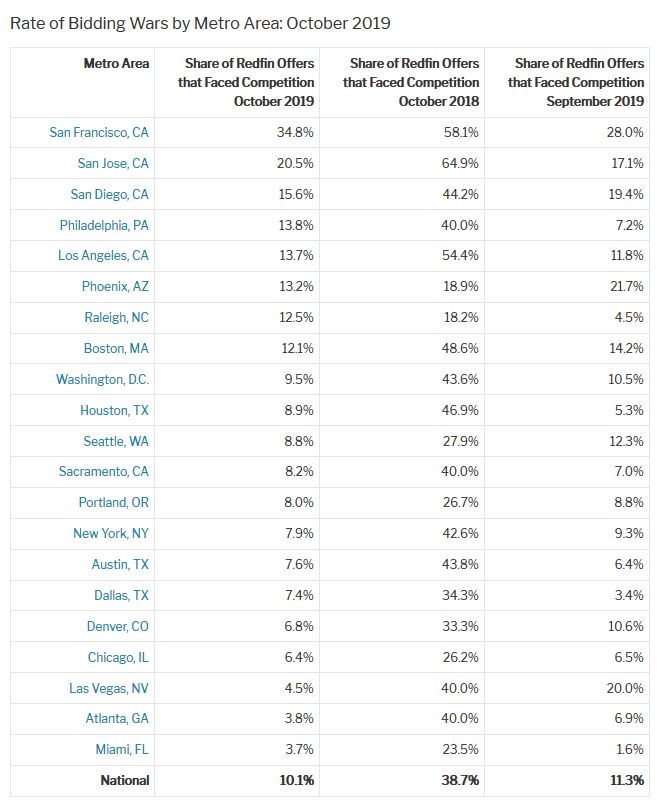 Nothing makes a seller feel better and a home buyer feel worse than a bidding war.  This is when multiple offers come in, driving up the price of the property for sale.

Historically low unemployment rates, rising wages and mortgage rates that are lower than a year ago, combined with limited inventories of homes for sale in certain geographic areas, are all contributing factors.

The table above was compiled by RedFin and shows that the national average is that 10% of all listings have experienced a bidding war.  Things are really hot in Seattle with more than a third of listings seeing buyers lined up and wiling to up their bid.

Mortgage backed securities (FNMA 3.500 MBS) gained +21 basis points (BPS) from last Friday's close which caused fixed mortgage rates to remain at or near the same levels as the prior week.

Overview:  Fed Chair Jerome Powell and a bevy of other Federal Reserve Governors and Presidents made it clear to the markets that the Fed is in a holding pattern for the near future.  Our economic data for the week was tepid, showing growth but not a strong enough pace to concern long bond traders about inflation.  The swirling "news" stories about the Chinese trade negotiations received most of the attention from market participants as that process is still "up in the air".

Retail Sales: The October data was a mixed bag.  The Headline MOM reading beat out expectations with a gain of 0.3% vs est of 0.2%.  But when you strip out Autos, Retail Sales had a monthly gain of +0.2% which was lighter than expectations of a +0.4% gain.

The Talking Fed: Fed Chair Powell gave his testimony on his economic outlook to the Joint Economic Committee. This committee has both Senate  and House representatives. You can read his official prepared remarks here.

Overall, it was fairly upbeat.  As far as rates and monetary policy, it addressed it by saying "As monetary policy operates with a lag, the full effects of these adjustments on economic growth, the job market, and inflation will be realized over time. We see the current stance of monetary policy as likely to remain appropriate as long as incoming information about the economy remains broadly consistent with our outlook of moderate economic growth, a strong labor market, and inflation near our symmetric 2 percent objective."